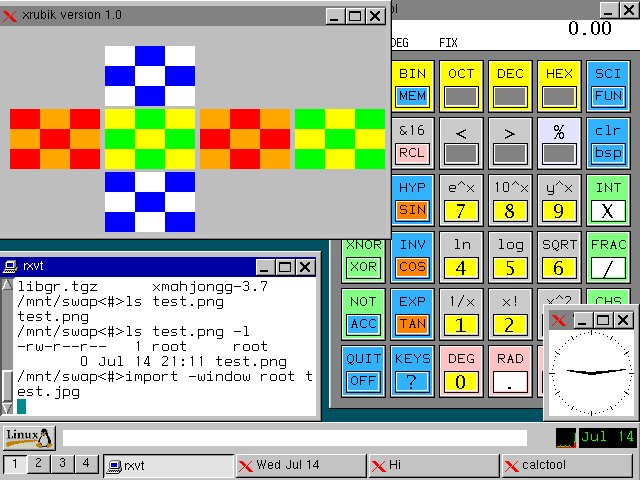 I discovered recently that my LCD doesn't seem to be able to do 320x200 mode with 256 colours. One of the old games I enjoy playing (Lands of Lore circa 1993) played alright under dosbox but I wanted to try it on the Real Thing (TM). So it was time to haul out the old 486 with 16 megs of ram and put FreeDos on it.

Well the FreeDos project was a great success. The game played much better on FreeDos on the old 486 SLC2 50 Mhz machine than it ever did under dosbox. The 3d game Blockout quickly joined Lands of Lore on the ancient 240 meg hard drive, but then I thought could Linux actually run on this ancient machine? Coincidentally the machine was just as old as the game, 1993 so 17 years old!

I tried various small Linux distros but none seemed able to run in 16 megs of ram. Worse still, it seemed that 16 megs was the absolute memory limit of this particular motherboard. There was no ethernet card in this computer and it's CDROM drive had stopped working years ago. It was time for the smallest of the small distros: Basic Linux 3.5

There was quite a bit of hand turning necessary to make this a usable system. First two floppy disks needed to be formatted and have the Basic Linux files put on them. Then it was made to be dual-booted with FreeDos. Next I fought with PLIP for a while (remember there was no ethernet card) but after a while the Parallel Line Interface Protocol was functioning at a roaring 30k per second. X was configured for the ATI VGA Wonder+ card which could handle 640x480 with 256 colours.

Once I discovered one could use packages from Slackware 4.0 things got easier. One major limitation was the size of the hard drive: I divided the 240 megs into two 120 meg partitions, one ext2 and the other for FAT16. I even managed to squeeze on a few games for X like xmahjongg and xfreecell (although xfreecell really didn't work too well in 640x480 mode).

When I first announced my intentions to run Linux on a 486 with 16 megs my 'friends' on IRC immediately told me to throw the 486 in the rubbish bin. I knew better of course and after completing the project I realized just how bloated operating systems had become. Finally the picture at the top is the end result.